We woke up fairly early, had some fruit (we planned to have breakfast in Venice) and hopped in the car. On the drive to Venice we avoided the toll roads which took us an extra hour on the two hour drive. When you exit Slovenia the landscape changes significantly. The mountains drop off into flat land.

We drove across the bridge to Venice and there was a very strong fish smell. Not a very pleasant first experience. We found Garage San Marco where we had decided to park for the day. The cost was 32 euros. We had looked into parking at the airport, but we would have had to take the bus and then it would have been more expensive. We worried about figuring out where the other parking lots were on the mainland and then having to take a bus or train from there so we were okay with paying.

We got into the car park quite quickly though I had read that during the summer sometimes there are lines of cars across the bridge waiting to get in. The odd thing about the parking lot was that you had to leave the keys in the car with the doors unlocked. Sometimes a car is parked in front of you and they need to move it to let you out so the keys have to stay. There are attendants on every level.

We exited the car park and walked towards the centre. There are approximately 400 bridges in Venice and thankfully Danny only stopped at the first twenty to take pictures.

We stopped at a patisserie and I had a cream puff filled with chocolate mousse. I could have eaten about five of them. Danny had a very big piece of cake. We walked some more and had a spinach and ricotta calzone. From there we went over the Grand Canal on the Rialto Bridge. There were already a ton of people taking pictures.

Our next stop was Acqua Alta Library. It is a book store with books in shelves, bath tubs and gondolas. There were also lots of cats. We climbed a staircase made of encyclopedias at the back for a view of the canal then visited a black cat for awhile. 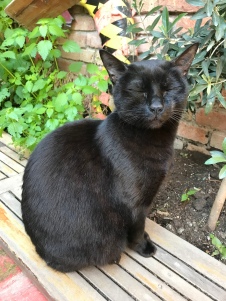 We walked out of the narrow streets to see the waterfront and it was boiling hot there. Danny was feeling crappy: maybe the sun or the sugary breakfast. We stopped at a restaurant on the waterfront. Danny had lasagna and I had black cuttlefish spaghetti. Venice is known for their black spaghetti which uses squid ink for the sauce. It actually wasn’t too bad although I think the restaurant in general wasn’t the best. Danny’s lasagna was sub par.

We walked on and saw the Bridge of Sighs. It is named after the many prisoners that sighed going over it as it was their last view of Venice. It was built in 1600 and connects the prison to the interrogation rooms of the Doge’s Palace.

We went around the corner to San Marco square which houses Basilica San Marco and Campanile di San Marco. The body of San Marco is believed to have been taken from Alexandria and brought to Venice in 828. The Basilica is dedicated to him.

We walked around a bit more then got some gelato. It also wasn’t too amazing. My food experiences in Rome were so fantastic that I had high expectations for Venice.

Another item on our list to see was the place where the shoot out at the end of Casino Royale was filmed. We walked back over Rialto Bridge and went down a back alley to a dead end. We had previously gone down the same back alley earlier in the day.

We decided to walk to the other side of the Grand Canal to see the building from that side. We walked passed the university and crossed a different bridge that was under construction. We went to the San Angelo ferry stop and looked across at Palazzo Pisani where the shoot out was filmed. I’m not sure it was worth all the walking.

We had to sit down for a bit after that. I think I wore Danny out a bit with all the walking. I was really loving storming around the narrow streets, finding the little bridges to cross and navigating to a destination. Danny gets tired of cities easily.

We went back to Calle de San Luca where the walking tour we booked started. We received headsets in order to hear the guide during the walk. She took us in a loop around the area. During the high tide the water rises approximately one meter at Piazza San Marco. It floods there first and then Rialto near the bridge. Metal doors protect the buildings and raised platforms are used on the sidewalks. To construct the buildings they blocked off the water to keep it on one side then put in wood with a slab on top. The canals are cleaned using a similar set up. Here are some other facts for you:

We saw the Contarini Snail Palace built in the 15th century. It was one of the Contarini’s twenty-two palaces in Venice.

The tour was about an hour and a half then we were taken on a 30 minute gondola ride.. We got the love seat in the gondola and very much enjoyed the short loop. It was just enough to say we experienced the gondola.

We climbed out of the gondola and headed towards the car looking for supper. We grabbed a slice of pizza at a quick place, but it wasn’t the atmosphere I was hoping for; it was loud and rushed. We went up the path and found a restaurant. We sat down and I had Prosecco with pizza. It was yummy.

From there, we walked back to the car. It would have been nice to see the city at night. We loved Venice. It was gorgeous to walk around. Danny couldn’t stop taking pictures. We were worried it would be too busy, but it was easy to take a side street with a few to no people on it. We explored mainly the District of San Marco and would have liked to venture further. We drove back to Slovenia taking the toll roads to get back quicker. Overall the day was quite pricey, but definitely worth it.