Danny went for a run this morning through the country side and I did some yoga in the small space we had. Danny is prepping for the Running of the Bulls in July and I’m just trying not to re-injure my back. All the sitting from driving will take its toll I’m sure.

An hour before we left my parents for the airport I decided I should have packed my running shoes. I was worried the cross over shoes I brought would cause too many blisters. We searched through boxes at my parents’ and my uncle’s, but were unable to locate them. I thought it just wasn’t meant to be. A couple of days in my cross over shoes and I decided I should have running shoes so we drove into Gloucester to a mall. We parked in a back alley not knowing if it was a spot. Our biggest trouble in towns seems to be where to park. Sometimes there doesn’t seem to be rhyme or reason: people park up on curbs, in bus stop zones, half into the street…it’s hard to know what to do. I found some shoes pretty quickly, similar to the ones that I had lost in the boxes at home. On the way back to the car we passed a parking enforcer and thought “Oh no!”. Luckily there was no ticket on our windshield, but we still haven’t confirmed if that’s how they do tickets here…

We drove on towards Brecon Beacons and on the way passed a castle. We looped back and decided to stop in. Raglan Castle was built in the 1430s. It was very exciting to walk through our first Welsh castle! I was running around like a child at recess and Danny didn’t put his camera away. You were able to imagine all of the rooms that were once there and climb up to see the where the troops would have come through the fields to storm the castle.

We continued our drive to our Airbnb near Llanfair Clydogau (which we still cannot pronounce properly). Google Maps had very different ideas about our driving capabilities. It took us through some very small towns on single lane roads. The sides of the road are stone walls or tall hedges that act as a fence for the fields, but make it impossible to see around the bends in the roads. We drove through a very small town and less and less houses were appearing. Google said to turn left down a hill. As we started down we saw a sign that read “Ford”. Both of us turned to each other with worried looks. We drove a bit farther down the steep hill and viewed a rush of water at the bottom that we would have to cross. The Hyundai i10 has treated us pretty well, but we weren’t sure it would make it across. We started backing up and the clutch started smelling of burning. We paused for a moment and then a truck started coming from the opposite direction up the hill in front of us. Our only option was to keep going backwards up the hill. We made it back up and took a rest to cool down.

We drove back the way we came and saw a sign for Llanfair Clydogau and decided to try this road. It led us around the ford still on a single lane road. Up and up and up and up. Over the hill until we had an amazing view of the valleys below. Luckily we didn’t run into anyone else along the narrow track. The road began winding back down and we found Llanfair Clydogau. The Airbnb was just outside of town up a hill and across a stream. The place was a nice little house with farmland behind. We stayed in what was like a granny suite. There was a kitchen, living room, large bedroom and bathroom. It had everything we needed and plenty of space. We were very glad to rest after a quite adventurous drive.

We had planned on driving to Snowdonia for the day, however, the forecast identified snow for the afternoon. We decided to get back early so we wouldn’t have to worry about driving through the snow. Danny had looked at the tires on the i10 and noticed that most cars here are built for summer. In my words, they don’t have grippy tread.

We drove down to Laugharne (which is not pronounced laf-ar-nee, it’s more like Lawn). The castle there was closed, but we got a nice view from the outside.

We were on the southern coast of Wales so there was a view of the Atlantic Ocean. It was very windy so we walked further into the town. We tried to walk to the grave of the famous Dylan Thomas (we didn’t know who he was, but apparently he is a poet from the 1940s, he wrote “Do not go gentle into that good night”). As we walked up, we believe we took a wrong turn because we just kept walking up and up. Finally we decided to head back down without seeing the grave. However, we did see the garage that he wrote poetry in.

From there we drove to Tenby. Again, we ran into parking trouble and only found a spot with 30 minute parking. We walked up to get a view of the castle and then down to Castle Beach. We laid on the beach for a picture and I got sandblasted in the face. Not quite the idyllic beach vacation.

We drove north from Tenby to Newport and stopped at The Royal Oak pub for lunch. We had hot chocolate until the lunch menu was available at 12. Danny had chicken pot pie and I had cottage pie. I’ve heard British people talk about cottage pie, but didn’t know the difference between it and shepherd’s pie. Well, if you are like me, cottage pie uses beef and shepherd’s pie uses lamb. 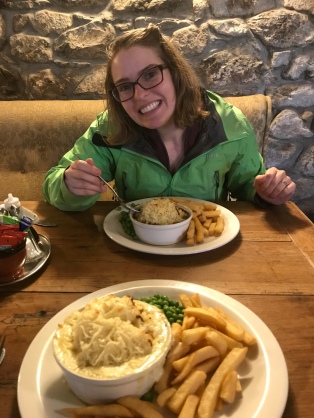 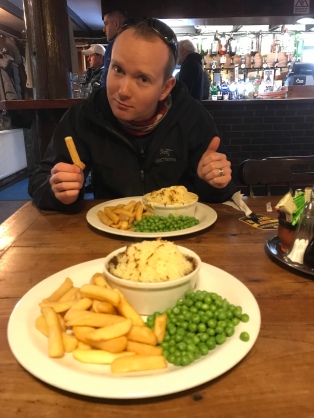 Pentre Ifan Burial Chamber was our next stop. We walked between two fields with sheep all around. It is the remains of a chambered tomb for the communal burial of the dead. The tomb was created as early as 3500 BC.

On to Castell Cilgerran. The area was once contested between the native Welsh and invading Normans who had built an earth and timber castle there in 1100. The present castle was built in the 13th and 14th centuries. We had the castle to ourselves as it was the off season.

Next was Castell Carreg Cennen. Building originally started here in the 12th century and then was handed to Edward I in 1283. There was a bit of a hike up to the castle. As we walked up, we hid behind the rocks pretending to be storming the castle. We could see the storm coming from the castle and on our walk down it really started to snow.

We stopped in Lampeter on the way back for groceries and then headed home before the snow really started. We had a very pleasant visitor that evening who reminded us of an orange kitty back home. He also didn’t like being picked up.

Rest day! We were able to sleep in even though I fell asleep early watching a movie. There was snow outside when we woke up, but only a little covering.

We planned a bit of Slovenia and I cooked up some breakfast. We bought some Welsh bacon, but were warned that it was super salty and fatty. It took forever to fry and when we tasted it the salt was overwhelming. We rinsed it under the tap for a bit and then fried it again. It was still super salty, but more manageable.

We took a walk down into the town and watched the sheep. Wales has so many sheep. There was one weird looking one with a super deep BAAAA that was almost like a burp. We walked back home and built a little snowman. We spent the rest of the day with a movie and some internets.