Typically, our first choice for hiking is Jasper. It is usually easy to find a place away from the crowds there. We try to avoid Banff for that reason; there always seems to be a crowd in Banff.On top of that, the QE2 from Edmonton to Calgary, which we need to drive to get to Banff is going to give me an ulcer.

Danny had a list of places we could go a couple of weekends ago: Waterton, Nordegg, Grand Cache and Kananaskis. The decision of where to go depended fully on the weather. Thursday night the decision was made we would go to Kananaskis. Kananaskis is located about an hour west of Calgary, but a 3.5 hour drive for us.

Danny did all the packing on Thursday and Friday morning we left bright and early. Luckily the QE2 wasn’t nearly as bad as on a weekend. We stopped in the Parks office in Peter Lougheed Provincial Park to get a list of a few hikes that we could do in the Kananaskis region.

According to my friend’s mom, the animals always come out when its raining. We did a reconnaissance drive around Peter Lougheed Provincial Park area and this proved true. We saw a couple of elk and white tailed deer and even a large moose. 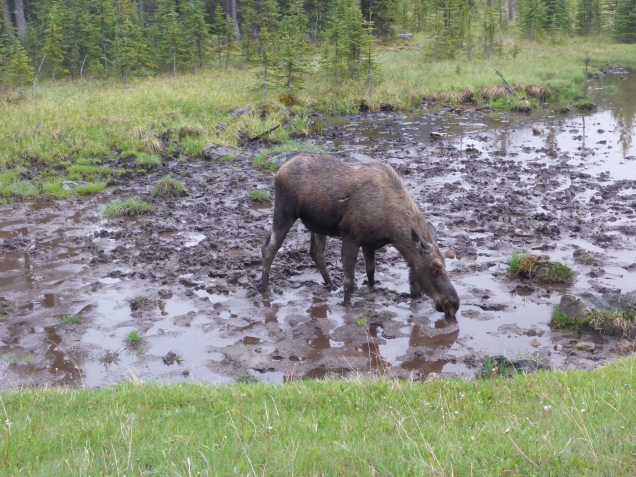 Our campsite, Interlakes,  overlooked Lower Kananaskis Lake. A week before we were there, a grizzly bear had tried to get into a tent in a campsite across the lake. They tranquilized the bear and transported it 30 km away. On our first night there, the bear was spotted back in the area. When the bear was two years old its mother died in a fight with a larger male grizzly. The mother used to take her cubs around the lake and sometimes straight through the campsite where we were staying. The mother was familiar with people, but knew not to come too close. Her cub never got the full amount of training from his mother to teach him to stay away from humans.We never got a chance to see the bear, but the next day we heard rangers shooting rubber bullets at the bear across the lake.

As humans we want to explore wilderness and unfortunately, we end up putting a lot of stress on the animals that live there. On our way home from Kananaskis we actually read a National Geographic issue regarding Yellowstone National Park. It described how the park was first created to “present wildlife “as a spectacle”” and the park was “for the benefit and enjoyment of the people” (National Geographic: Yellowstone, May 2016). There is a picture in the article from 1972 showing a black bear on the road with people surrounding it taking pictures. Even though we’ve come a long way since then, National and Provincial Parks are still not a complete sanctuary for wildlife. 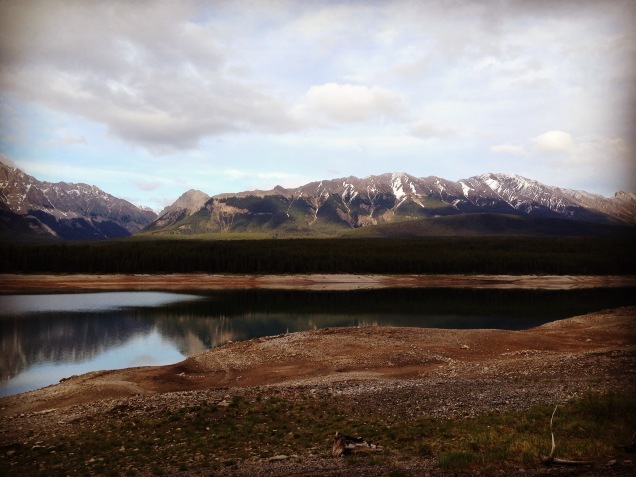 On Saturday morning, we woke up to have some oatmeal, only to realize we did not bring a pot. We have a packing list created for exactly this reason, but as we were only going for a couple nights we overlooked the list. Luckily we had a metal water bottle that we were able to stick over our camp stove to get some warm water.

When we got to the trail head for Wasootch Ridge, we realized our decision to not fill our water bottles at the campsite was not the best idea. There was an old river bed running along the edge of the parking lot, but absolutely no water to be seen. We had one full water bottle and five juice boxes.

The start of the hike is a bit hidden. There is a sign showing a map of the area, but the trail head is behind some picnic tables. The first portion is basically straight up. From there it becomes a more rolling landscape. It is about a 3 km hike to get above the tree line. The weather was quite odd that day. The sun would be shining and you’d be sweating from the heat one moment and then the wind would pick up and you’d have to put your sweater back on because your arms would be freezing. On the hike up we even had a little bit of snow. Because of our tactical error of not packing enough water, we decided not to go all the way to the ridge’s peak, which was probably another 1.5 km from where we stopped. The view from that spot was still exquisite.

Our first official trip to Kananaskis left us with a very positive impression.We did a hike last year to Mount Assiniboine and the trail head was in Kananaskis. This was our first trip just to see Kananaskis. The area had “people sized mountains”, which made it easy to get above the tree line and get an amazing view. There was also minimal crowds and very laid back atmosphere. We were both surprised with how much we enjoyed it, but we look forward to going back!

We will leave you of a video of a grizzly bear playing with a coffee cup. 🙂